Real Estate Trends to Expect In 2017

Irrespective of your personal plans for owning or selling a property, being updated about the trends in real estate is always a smart idea, as it can help you make the right decision when the moment arrives.

Even though predicting the future trends in this industry is more about intuition than the regular statistics, economists are confident about a couple of sanguine developments in mortgage services that could ensure the optimism over the next twelve months.

The government is expected to come up with some changes to affordable housing regulations to ease up financial services, and a lot would depend on the directives from the Federal Housing Authority.

The years following the recession have seen a considerable dip in the inventory of affordable homes. The rentals, as well as the cost of buying multifamily houses such as condominiums and apartments, have appreciated considerably. As the increase in housing prices depends significantly on the equation of demand and supply, the new surge in affordable housing inventory in 2017 is expected to ease up the supply constraints.

Experts are optimistic about a higher growth in income levels as compared to the increase in rentals, increasing affordability. However, the economy still doesn’t indicate many signs of being advantageous for the housing market.

Even though the rental rates may still increase, it might not be substantial, as the construction of multifamily rental units has seen an adequate surge in many major urban areas as well as in the suburbs. The fact that most renters are opting for more roommates so as to distribute the rental cost has also eased up the demand moderately.

Industry observers have also noted the demand for the affordable one-bedroom or studio apartments in metropolitan cities that has seen a paradigm shift in the sizes of the homes over the past few years. While this has contributed for efficient use of space, it has also played a vital role in maintaining the parity in the aspects of quantity and cost.

The year 2017 might also witness an increase in housing prices, which, however, could translate to higher rates of refinancing, as it would lift up the equity accrued in the property. 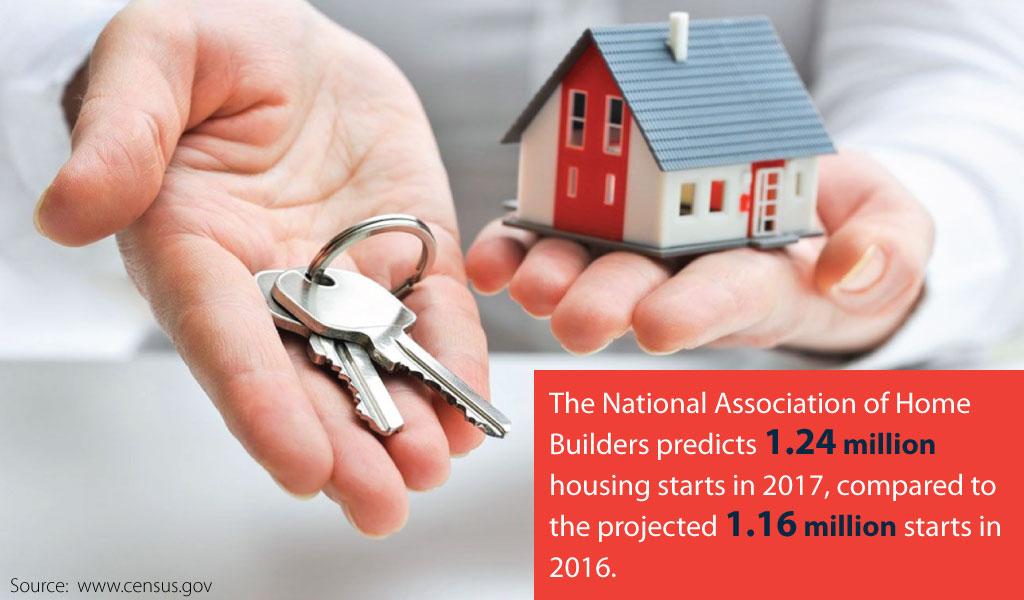 Hence, the rising home price could provide the homeowners an opportunity to opt for a refinance or utilize the home equity loan to get a little extra cash.

As Millennials have already surpassed Baby Boomers as the largest living generation, the participation of the latter in real estate market has also seen a decline. Having witnessed a decline in the value of the properties they own due to the housing bust, most are reluctant to sell them until they get a good price. Simultaneously, 2017 could also witness the Millennials entering the housing market as they plan to settle down and own a house of their home. However, the limited vacancy of homes in city centers has seen the new home buyers being forced to consider residences in the suburbs. While this may push them away from commercial centers and urban business zones, they would still be able to buy homes that are value for money.